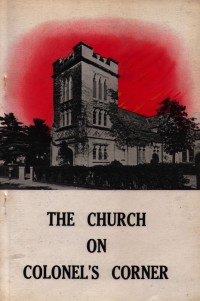 A HISTORY OF CHRIST CHURCH

We are pleased to announce that we have re-released the book 'The Church on Colonel's Corner' in pdf format here on our website. Written by the Reverend Eric Casson, the book charts the history of our Church over the first one hundred years from 1862-1962.
In this revised electronic edition we include a short Addendum written by the Reverend John Berg who reflects on the years 1968-2004.
To read this edition simply CLICK HERE

1860 - Visit of Bishop Alford, the second Bishop of Victoria Hong Kong to dedicate the International Cemetery and hold confirmation in Christ Church, the Garrison Church.

1862 - Land leased in perpetuity from the Japanese government. Arrival of Rev. Buckworth Bailey. Services held in the residence of H.B.M. Consul, Captain Vyse & his successor Charles A. Winchester.

The First Church located in the Foreign Settlement

1866 - The Great Fire. The settlement is destroyed but the Church is spared.

1874 - The British Garrison leaves Yokohama. Noticed served on the parish that funding would cease from Britain on 31st December 1875. 13th January. Seat-renters meet at the British Consulate starting the process of drawing up a Deed of Trust to ensure the continuation of the Church.

1880 - The Reverend Chaplain Edward Champneys Irwine appointied as the last Chaplain of the first Church.

The Second Church relocates on the Bluff

1901 - Services are held in a public hall until the second church was built. It is not known what happened to the first church. The construction may not have been safe or may not have weathered well or the the church may have been destroyed by fire. Trinity Sunday, June 2nd 1901 the second church, built of red brick from Glasgow was completed on the site of the church today.

1908 - It is realised that marriages performed since 1899, when the community came under Japanese law, are not valid. The matter arose when a judge in England adjuducated in the divorce case, Marshall v Marshall, that no divorce could be given as there had been no valid marriage. February 9th The Bishop of Tokyo explains in the sermon that the 30 marriages that were carried out were not valid without a civil ceremony at the Consulate. (A special Act of Parliament was later passed to legalize the marriages and legitimize the children born to the parents in question.)

1923 - August 31st. On the way up to the Parsonage, Mr Catto, the organist, believes he sees a coffin covered with a Union Jack in aisle of the church. The Rev. Eustace Strong is surprised to hear this and he and Mr Catto investgate finding nothing there.

Christ Church is completely destroyed. Rev. Strong unhurt directs the rescue of survivors trapped in the rubble. He saves many including the Spanish Amassador and the patients of the English General Hospital. The Chaplain and the survivors move to Kobe for safety.

1926 - Reverend Cecil P. Hodges dies of pneumonia in Korea visiting the Church where he previously worked.

1930 - The church commisions an Architect and rebuilding begins.

12th May A service in honour of the coronation of King George VI and Queen Elizabeth is held. It is attended by many Japanese officials , including five Admirals, representatives from diplomatic missions and many British seamen from ships in the harbour.

1941 17th March. Due to the hostilities Christ Church is handed into the care of the Japanese Anglican Church through the Japanese Bishop, The Right Reverend Tomomu Sugai.

The Japanese government orders all Christian denominations to unite and make up one approved Union Church. Those who disagree are imprisoned.
Bishop Sugai imprisoned..
7th December. War breaks out.

1942 - 12th April. Sunday after Easter. Rev. Symonds celebrates Holy Communion for the civilian prisoners for the last time. The Church building is used as a store for the adjacent Naval Hospital. The nave and the choir becomes an officers club and theatre.

1945 - 29th May The Church is destroyed by an American air raid. The first 100 bombers drops high explosive in a concentrated pattern across the town. The second wave of 500 'Fortresses' drops thousands upon thousands of incendiary bombs. The nave and the choir burn long into the night.

February Work begins on restoring the side chapel
Third Sunday in April The side chapel is ready for use.
August The Rev. Stephen K. Iwai, a English Speaking Japanese priest is sent by the Bishop as resident priest.
Winter Services are moved into the Rectory and are taken by Father Iwai, The Right Reverend Kenneth Abbot Viall, S.S.J.E and Douglas Overton, American Vice Consul and licenced lay reader.The work of cleaning and rebuilding the church is continued mainly by soldiers in their spare time.

1952 - December The British consul, Mr Henry Sawbridge writes to the Missions to Seamen asking whether it is possible for the them to send a Chaplain.

1954 - The last American chaplain is withdrawn ending eight years of help from the Chaplains of the American Armed Forces. 14th March The Rev. Gunter Helft instituted Rector by The Right Reverand Issac Hidetoshi Nosse. The Trust of 1941 is terminated and Christ Church returns to the foreign Anglican congregation.

1959 - 19th April Visit by His Grace the Archbishop of Canterbury, The Most Reverend Geoffrey Fisher, D.D.

1978 - Yokohama Christ Church Vestry passes a motion that the Church ownership should be passed over to the diocese of Yokohama: as is the case with all parishes in the diocese.

1988 - The transfer is passed by the diocese conference.

1990 - The Church building is completely restored: with much of the stone work being replaced by new stone quarried from the same quarry where the original stone was dug.

1995-6 - The interior of the church and the hall are redecorated: extensive extensions are made to the rectory and the buildings.

2013 - October - celebrations of the 150th anniversary of Christ Church. 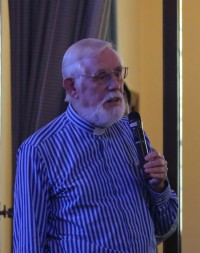 The Reverend John Berg was the Rector at Christ Church and the Mission to Seafarers Chaplain in Yokohama for almost forty years. During his time he witnessed many changes to the life of the foreign community here. We are most grateful to him for recording some of his experiences in a brief article that can be read here. CLICK HERE
Made with SimDif 2